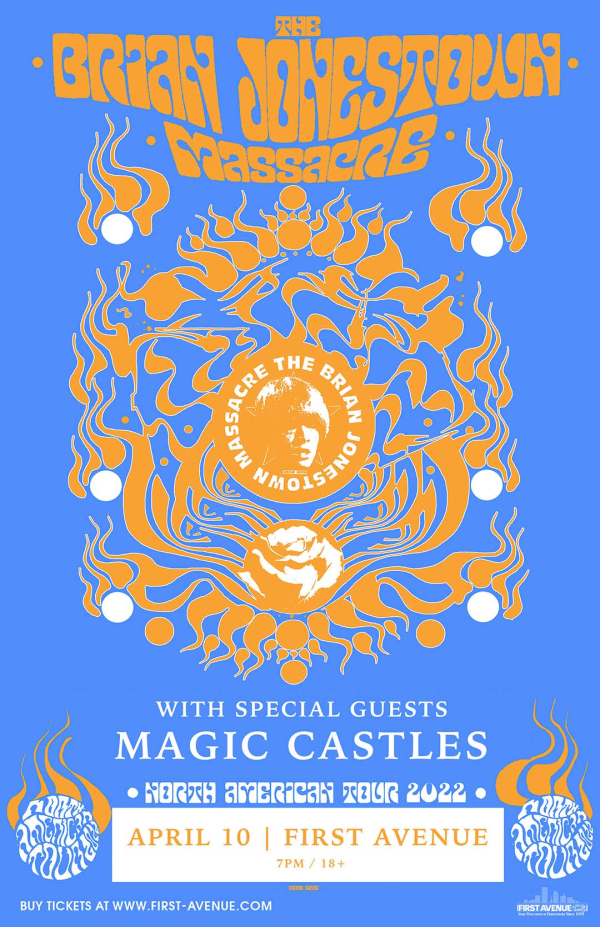 By Beatrice E. Esparza On Apr 11, 2022
Share
Massacre of Brian Jonestown a long throwback to Minneapolis took place on Sunday at First Avenue in Minneapolis, in support of their upcoming album Fire does not grow on trees…scheduled for June 24, 2022. Additionally, the group has also been writing and planning their companion album The future is your pastscheduled for October 2022.

Mercury Rev was originally the band to support BJM… but due to COVID concerns they dropped the tour until April 12th.

Local psychedelic group magic castles (vocalist/guitarist Jason Edmonds, vocalist/guitarist Jeremiah Doering, bassist Paul Fuglestad, drummer Brendan McInerney) stepped in at the last minute to save the day. It made sense, as Magic Castles had already opened for BJM in May 2016…and we love the band, as they were one of the few highlights of the Bathysphere: a psychonautical journey festival in May 2013.

A lot has changed since 2013, apparently the band lost their flautist. Their music was discovered by Brian Jonestown Massacre band founder/leader Anton Newcombe… who signed the band to his A recordings.

The songs on the Magic Castles set were mostly new songs by reign of the sun and their previous album Sky Sounds.

With all musicians and tightly controlled sound, the band creates layers and layers of psychedelic soundscape. Singer Newcombe barely spoke throughout their set, instead letting the music speak for itself. When he does speak, it’s usually to complain that his guitars weren’t tuned right (and he has to take a few minutes to get it right before he plays).

As you can see from the setlist (see photo below), most of their songs are taken from their latest The future is your past…that the band admitted they were just looking forward to testing those songs live. Newcombe, quoted: “For me, living is where it [these songs] live or die. So for me to have the chance at my age to go on another world tour for two years and play bigger venues, bigger theaters and be at the top of my game, it’s an honor as well as ‘a challenge. We are very excited.”

Brian Jonestown’s next album Massacre Fire does not grow on trees will be released in June 2022, via A Recording.