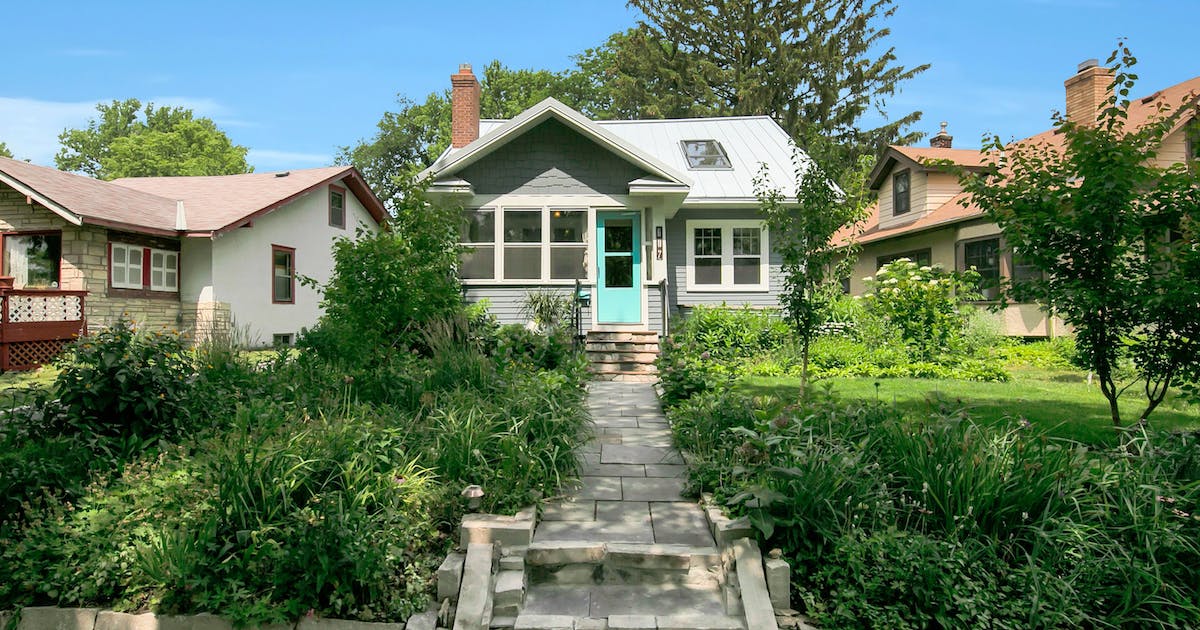 Carol Hejlstone is an avid cyclist and gardener.

So when she and her husband, Jesse, returned to Minnesota 12 years ago after living in Chicago and Vancouver, she was drawn to a home in the Bryn Mawr neighborhood of Minneapolis.

“The location really drew me to the house, the proximity to downtown, the chain of lakes,” she said. “Door to door is a 2 mile bike ride to Target Field and downtown. The location was just a dream.”

On the garden side, the yard needed work, but the potential was there. And Carol happened to have gone to landscape architecture school and worked at a big garden center.

“The yard was a blank slate. There was a tree stump and a few random old hostas. For me, it was a fun challenge,” she said. “We love doing these kinds of projects.”

The house would also need to be renovated. Luckily Jesse was an entrepreneur.

The Hejlstones were given the right to work with the garden.

“Everything we’ve done, we’ve tried to do in a regenerative way, so without using chemicals or herbicides or pesticides and really trying to work with what we have,” Carol said, “and to make things better through biodynamic methods with a special kind of composting and the way you grow the plants.”

They established pollinator-friendly prairie plantings that would bloom throughout the gardening season.

“As soon as the bulbs start growing in the spring, we are one of the houses that start [seeing signs of life in the yard] as well as one of the last with fall perennials,” she said.

Vegetable gardens were added, as well as about thirty shrubs, fruit trees and shade trees, as well as vines producing blackberries, currants and grapes.

The gardens allowed the family to live off their land and share their wealth with others. It also became a fun place where his son Ziggy could look for food.

“He’s an adventurous eater with all fruits and vegetables,” Carol said.

They also built a chicken coop – created from a repurposed trampoline – and raised chickens.

The family also made updates at home. Built in 1924 in what is now Bryn Mawr Meadows Park, it was at some point moved to its present location on Morgan Avenue.

From what the couple could tell, the house had not been renovated much.

“It was outdated,” Carol said. “I think it may have received a kitchen renovation in the 1970s.”

They installed new mechanicals, including high-efficiency central air conditioning, and updated most rooms while preserving the original hardwood floors as well as a cast iron tub.

One of the biggest transformations was in the kitchen, where they installed new cabinets, quartz counter tops and stainless steel appliances. They also replaced the vinyl flooring with herringbone-shaped ceramic tiles.

Other improvements included the installation of a metal roof and the addition of a Juliette balcony to the master bedroom.

“You get these awesome views of downtown and overlooking the park and all the front yard gardens,” Carol said.

The basement has also been insulated and finished. “It gave us extra living space,” she said. “It became a bonus room and play space for our son.”

After more than a decade in the three-bedroom, two-bathroom, 2,500 square foot home, the Hejlstones have decided to sell.

“It’s time for a change and we’re embarking on the next adventure. We’re just moving a little further south [in Minneapolis] with more square footage and a bigger yard,” Carol said. “It’s another blank slate to start this process over again. I grew up on a farm in North Dakota, and that farm girl in me never stops.”

She said the next owner will not only get an updated home with an “established food forest,” but also good neighbors.

And there’s another bonus: they’ll add a lifetime membership to Utepil Brewery a mile away. The Hejlstones were investors when the brewery was founded, and their two VIP “memberships” are transferable. “That means one free beer for every person every time they go to the brewery, plus two free growlers every month for the next 90 years,” Carol said.

Listing agent Sonda Featherstone said anyone living there would benefit from a great location with more amenities on the horizon, pointing out that Bryn Mawr Meadows Park is set to receive a multi-million dollar upgrade and the future southwest light rail line will be walkable. .

Featherstone said the home has lots of charm and living well, with features like a dining area, open kitchen and three-season porch.

And there is nothing to be desired with the exterior spaces of the house either.

“Vendors made excellent use of the yard,” she said, with “an inviting back patio, beautiful gardens and a lovely bonfire area.”