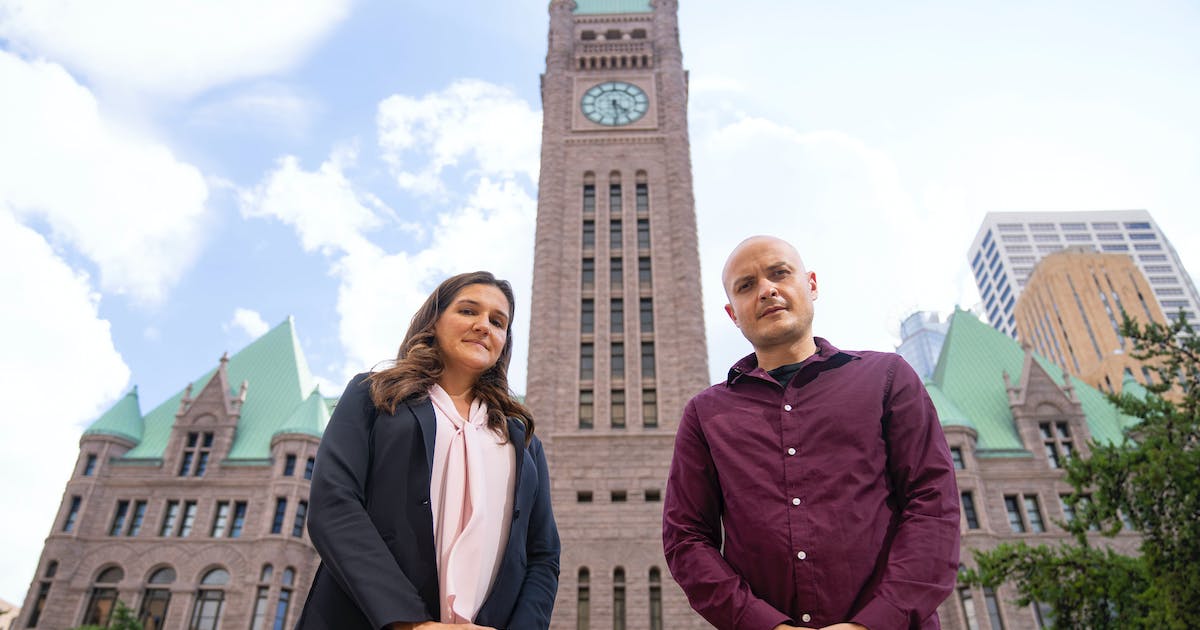 When Andre Cherkasov reported suspicious fraud activity while working at Richfield Best Buy over the holidays, little did he know he could come to the rescue of dozens of identity theft victims in the Twin Cities .

“Just the way she behaved, I kind of knew she was on some kind of substance,” Cherkasov said in a recent interview.

After the woman was approved, she lowered her mask and Cherkasov immediately saw that her face did not match the photo on her papers. He raised his concerns with Richfield police officer Amanda Johnson, who worked at the store, and researched Palmisano online. Not a match there either.

Shortly after, the real Linea Palmisano – a member of the Minneapolis City Council – received a message asking if she had just opened a line of credit at Best Buy. And Johnson quickly arrested the fake Palmisano, who turned out to be 33-year-old Emily Gerst of Minneapolis.

The arrest opened the door to an investigation into a six-month crime spree in which Gerst and Thomas Stoyka, 36, of Minneapolis, allegedly stole the identities of 158 people in the metro area. Each is charged with one count of impersonation.

Using big-box store credit cards issued in Palmisano’s name, the couple managed to steal $12,000 in just 10 days. Palmisano said she didn’t know how long they would have gone on if Cherkasov hadn’t interfered.

“Nobody… defended me or any of these other victims that I know until Andre did,” Palmisano said. “And then Officer Amanda Johnson really honed in and connected all of those dots together.”

Gerst is due in court on September 6, while Stoyka’s fate is unknown; a warrant has been issued nationwide for his arrest. Charges recently filed in Hennepin County District Court allege a loss of more than $35,000. Court records show that many of the items they purchased with fraudulent credit cards were pawned.

According to the charging documents, Gerst and Stoyka operated out of a storage unit on Hiawatha Avenue in Minneapolis. Police found a wig, printer, laptop, blank checks, lock picks, keys, a State Driver and Vehicle Services stamp, a hose camera and a tool. keystrokes to steal mail – all used to forge documents, steal identities and open bank and credit cards in online stores and apps like Apple Pay.

Shortly after Gerst opened the credit account at Best Buy on Dec. 20, Johnson watched her, Stoyka, and an unidentified man walk to the counter to purchase more than $2,000 worth of items. According to court records, Stoyka and the other man exited and entered what turned out to be a stolen SUV. The unidentified man returned to the store to join Gerst while other cops pulled into the parking lot.

Stoyka fled, driving “so recklessly that they called off the chase”. Gerst, who declined to identify himself, had in his possession a credit card belonging to another victim and Palmisano’s printed driver’s license.

Throughout the ensuing investigation, Johnson discovered just how elaborate and extensive the couple’s operation was. After sifting through stolen mail and false papers in the storage unit, the officer counted 158 identity theft victims and was able to contact 124 of them to confirm that their information had been stolen.

According to court documents, Gerst and Stoyka’s cellphones and tablets contained a slew of fraud proceedings and internet searches. Stoyka’s phone had video of him holding hundreds of dollars, and an iPad had pictures of personal checks. According to court documents, Gerst’s phone “contained personal identifying information belonging to numerous other victims of identity theft.”

Gerst and Stoyka also face criminal identity theft charges related to a May burglary in Edina. Surveillance video captured the couple entering an underground garage on York Avenue in a stolen Subaru Forester. Police then searched the vehicle, abandoned in Minneapolis, and found stolen mail, ledgers, a box of washed up checks and a bag of unused syringes. In addition to the stolen IDs of more than 100 people, the couple had left information about themselves, including a court recall notice for Gerst.

Edina Police Detective Jason Behr said on Tuesday he believed most of the 100 victims were additional to those identified in the Richfield investigation, making this a “pretty significant case”.

Palmisano was in Chicago for the holidays, sitting around the dining room table with her family when she received a dispatch call asking if she had just opened a line of credit at Best Buy in Richfield. Although she never had her wallet or ID stolen, Palmisano said Gerst and Stoyka somehow obtained her Social Security number and used it to open credit card accounts.

“Before that, I had never really been mistaken for anyone else,” she said. “And my own blind spot was that I felt pretty good and safe.”

Cherkasov said when he reported his suspicions to Johnson, he did not know that Palmisano was a Minneapolis City Council member. All that mattered, he said, was that someone got hurt.

“I believe in karma,” he said. “Someone does something good for you, so you’ll get something good back in the future. I just hope everyone is like that – you know, making the world a better place.”

Palmisano said she considers herself lucky. Despite a credit freeze, she said she hasn’t had to get a new credit card, refinance her home or buy a new car. While the process took hundreds of hours and cost her thousands of dollars, she says, the biggest loss was her own sense of security.

But she said her faith in society had been slightly restored by Cherkasov’s vigilance. In a postcard she sent him, she wrote that he was “a constant angel in my identity theft story. And I will never forget him. Sincerely, Linea Palmisano (the only real one as far as I know.)”