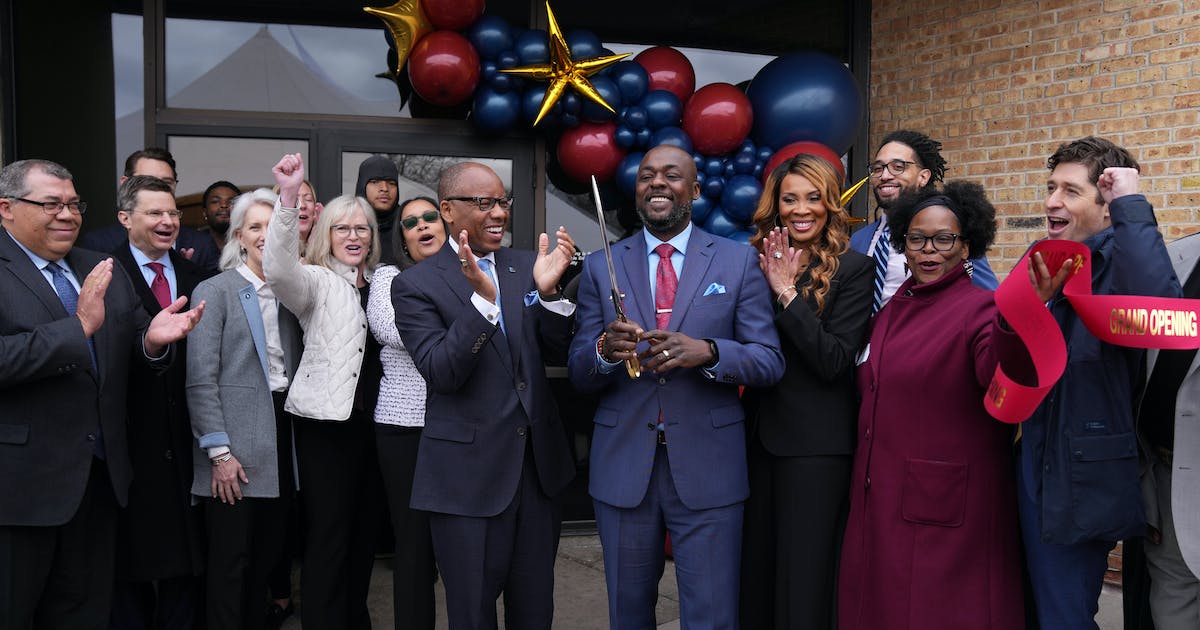 At the grand opening last week of Minnesota‘s first black-owned bank, CEO Kenneth Kelly offered some of the usual superlatives.

“It’s absolutely amazing what you see today,” Kelly said, gazing at more than 100 elected officials, community leaders and others outside the First Independence Bank branch on University Avenue in Minneapolis. “It’s beyond anything we dreamed of.”

Then he did something unusual. He asked the leaders of five competing banks to stand by his side. “Don’t be shy,” he nudged them.

One by one senior executives from Bank of America, Bremer Bank, Huntington Bank, US Bank and Wells Fargo joined him at the front.

“I want the world, I want the Twin Cities, I want Minneapolis to see what can happen when individuals decide they want to make a difference,” he said.

Over the past year and a half, the five leaders have met with Kelly regularly, sometimes up to once a week, to help him expand Detroit-based First Independence to the Twin Cities. They showered him and his bank with financial, logistical and technical support.

In the process, they helped him achieve something that is quite rare for black-owned banks. Over the past two decades, the history of these institutions has more often been one of closure than of expansion into new markets.

There were once more than 100 black-owned banks in the United States. But historically undercapitalized, their numbers have dwindled in a competitive industry with rising costs that has seen waves of mergers. Today, only 16 of the country’s approximately 4,000 banks are black-owned.

With just over $400 million in assets, First Independence has been a Detroit staple for more than five decades. It was founded after riots that broke out after a police action in this city in 1967.

Fifty-three years later, it was the murder of George Floyd — and the ensuing civil unrest and racial reckoning — that sparked the chain of events that led to First Independence coming to Minneapolis.

In the wake of Floyd’s death, the five Twin Cities bank executives came together to discuss how they could make a bigger dent in reducing the region’s stark racial disparities in areas such as wealth. and home ownership.

Each bank had already announced a number of its own racial equity initiatives, including millions of dollars in loans for minority-owned businesses.

“But we said, ‘What more could we all do collectively? “” said Laurie Nordquist, who was then regional president of Wells Fargo and who recently retired.

As they brainstormed ideas, they focused on the lack of a black-owned bank in the Twin Cities.

“We realized that to close the racial wealth gap, it would be better to have a black-owned bank in our community in addition to all of us,” said Tim Welsh, vice president of retail banking and to businesses. at US Bancorp. “For many historical reasons, many members of the black community do not have as much faith in traditional financial institutions as we would like.”

Mike Jones, who runs the Minnesota market for Huntington, said he knew Kelly from doing business with him in Detroit. When Kelly met with the Twin Cities bankers, he told them he wanted to expand First Independence outside of Detroit for several years.

The Twin Cities Group realized, Jones said, that “we could move faster to get their bank established here in the Twin Cities.”

Jeanne Crain, CEO of Bremer Bank, said she was impressed with Kelly’s leadership and the bank’s track record. “It seemed like a perfect fit,” she said.

The Twin Cities weren’t on First Independence’s list of potential markets until 2020 and really took off when Minnesota bankers approached it, Kelly said in an interview.

But as a relatively small bank with limited resources, Kelly knew it would need help expanding into Minneapolis. The five bankers therefore agreed to sell First Independence $200 million in loans to ensure that it would have an immediate source of income.

Additionally, Wells Fargo and Bank of America made equity investments, and First Independence raised an additional $20 million from other investors.

Banks have also opened other doors. All five banks, plus a few others, are now waiving surcharges for First Independence customers to use their citywide ATM networks, giving them greater access to cash.

Nordquist proposed a recently closed Wells Fargo branch for the first location of First Independence on University Avenue. Had drive-thru and was close to light rail and St. Paul. And it was already banked, so it didn’t take much work to get it back up and running.

Wells Fargo donated the building to the nonprofit Project for Pride in Living, which leases it to First Independence at an affordable price.

The bankers also suggested Kelly bring in Damon Jenkins, a Twin Cities-based district manager who has worked for both Wells Fargo and US Bank, to run First Independence’s operations in Minneapolis.

“It’s not always easy to give some of your best talent to someone else, but it was so important to the success of bringing in this black-owned bank to have someone who really knew the community, knew it well and knew the bank,” says Nordquist.

Black-owned banks can be a “significant provider” of mortgages and small business loans for people of color, said Nicole Elam, president of the National Bankers Association, which represents black-owned banks.

“They often say yes when others say no,” she said.

For the first independence, increasing homeownership among black residents will be a priority in the Twin Cities, Kelly said, because the region has one of the worst racial disparities in the country in this area.

First Independence will have a counselor from the non-profit organization Operation Hope on-site at its branch two days a week to help people improve their credit.

Over the past few months, Jenkins has also reached out to nonprofits and other community groups about potential partnerships for new homeowner programs and financial education classes.

A second First Independence branch in Minneapolis is scheduled to open in June at Lake Street and Hiawatha Avenue.