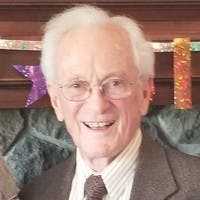 Graham, Keith D. Longtime Champlin resident Keith D. Graham died February 9, 2022. He was born in Sioux Falls, SD in 1928 and raised in Canistota, SD. He graduated early from Canistota High School and entered the South Dakota School of Mines and Technology in June 1945. In 1946 he enlisted in the United States Navy for 2 years and trained at Airborne Electronics Basic Maintenance School in Corpus Christi, TX. It began what would become a lifelong career in avionics with what Keith called the “science fiction department” at the Honeywell Systems and Research Center in Minneapolis. He would tell you that if he was flying, he probably worked there, including the space shuttle program. After his release, he returned to school. While at school he had a very serious car accident, his car came out of a bend when his headlights failed. He recovered many broken body parts, including a broken jaw. To this day, little children were still fascinated when he pulled out their bottom teeth. He received his bachelor’s degree in physics in 1951. He then went to the University of Minnesota to earn a master’s degree in mathematics. During this period he met and married Bernie Poehler of St Paul, MN. They married in 1953 and in 1954 became members of the “Landed Aristocracy” as Keith had written to his former mentor at school. They had purchased the land on the Mississippi River in Champlin which would be his home for the next 65 years. In the years that followed, the normal events of a marriage happened. 3 children, mortgages, work and vacation. In 1973 Keith received his doctorate in mathematics from the University of Minnesota. In 1974 the whole family moved to Warsaw, Poland for a year while Keith attended a National Science Foundation program as a faculty member at the Technical University of Warsaw. Keith and Bernie divorced in 1976. In 1979 Keith and Helen Severson married. The combined families were now 10 in total. In 1981, Keith developed and taught the Master of Engineering (EMP) program at Honeywell in conjunction with the University of Minnesota Institute of Technology. It was one of the few programs in the country that allowed a qualified employee to earn a master’s degree in engineering in 3 years while working with a full salary. Keith maintained this program until his full retirement. After his retirement, he and Helen traveled extensively. Keith also loved to ski and skied into his 80s, but hung on when the ski slopes started to load old people. His second unofficial career involved learning and teaching others how to invest. He spent 17 years on the investment committee of the SD Mines Foundation. He was always willing to volunteer at his church, Anoka’s 1st Congregational Church. With the large Twin Cities family, there were always family celebrations to attend year round. Keith just celebrated his 93rd birthday in October. He is survived by his wife Helen and his brother Dean (Donald) and his children Reah, Kurt and Kit and his stepchildren, Greg, Rise¨, Brian and Kathy and all their spouses and loads of grandchildren and great. – grandchildren. The family would like to thank the loving staff and caregivers at Walker Plaza-Gardens in Anoka, MN. Arrangements to come via the Neptune Society.