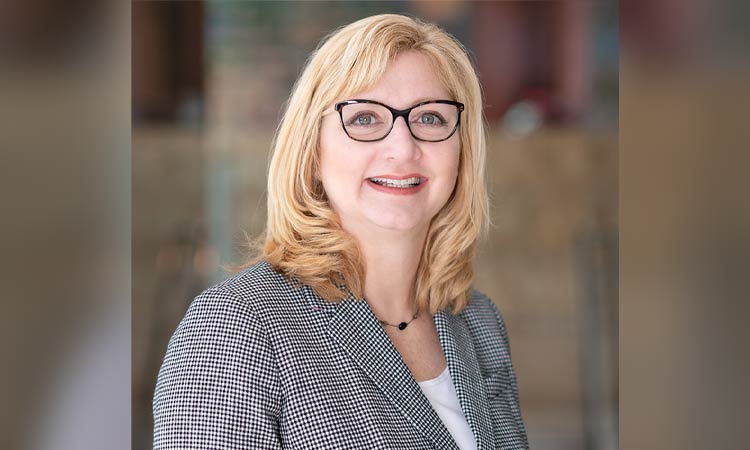 One hundred and eight years later, the Minneapolis Fed Board appointed its first general counsel. LuAnne Kinney Pederson ’92, who has worked as a lawyer for the bank since 2001, and began her new role as senior vice president on Wednesday, June 1.

“I think Saint Ben’s prepared me very well for this,” said Pederson, who worked in banking for seven years before graduating from William Mitchell College of Law in 2000. law school taught me the legal part. But Saint Ben’s provided that underlying liberal arts education that was so helpful to me, providing me with a wide range of experiences and sharpening my general analytical skills.

After graduating from South St. Paul High School, she visited CSB in part because her father had attended Saint John Preparatory School. She started out as a government major, but later switched to sociology, with a minor in Spanish.

Due to a slow recovery from a recession in the early 1990s, Pederson took jobs as a bank teller and later as a personal banker – jobs she had worked part-time during summers and vacations during her University studies.

“It was kind of an oddity that I ended up in banking,” Pederson said. “I wasn’t the typical lawyer who went from college to law school. I worked in banking until I decided that wasn’t what I wanted to do for the rest of my life. I decided I wanted to be a lawyer, and William Mitchell College of Law (now Mitchell Hamline School of Law) offered an evening class program. I was a bit unique at that time because I was a bit older, already married, and had a mortgage, so my situation didn’t allow me to stop working and focus entirely on school. . I worked full time during the day and went to law school at night. I did that for four years and graduated.

For over a year, she served as court clerk for the Honorable James A. Morrow, Anoka County District Court Judge.

“At one point I thought I wanted to be a litigator, but I always knew I wanted to practice in a field that served others,” Pederson said. “I think it grew out of my experience at Saint Ben’s and the mission of wanting to do something in public service. I was considering working for Legal Aid (which provides free legal services to vulnerable people), and it didn’t work out for a variety of reasons. But one day, I literally saw the opening at the Fed in the newspaper, back when you were looking at the classifieds. I thought it would fit perfectly with my banking background and legal experience. The Fed is more business than legal aid, but it’s the nation’s central bank and you know you’re working for a public purpose in a mission-driven organization.

Pederson served as an attorney from 2001 to 2014, after which she was promoted to assistant vice president, assistant general counsel and assistant corporate secretary, assuming responsibility for the day-to-day management of the bank’s legal division. In 2018, she became Vice President and Corporate Secretary. Now, four years later, she succeeds Niel Willardson, who is retiring as General Counsel.

“LuAnne has been a leader at the Bank and has demonstrated a strong commitment to our public service mission,” said Senior Vice President Ron Feldman, to whom Pederson will report. “She was instrumental in ensuring operational excellence in the legal division, championed a diverse and inclusive work environment, and facilitated improvements in the way we do our work.”

Pederson’s primary expertise is employment law, which helps advise the Bank’s Human Resources and Inclusion department to serve over 1,000 employees. She is also responsible for the Bank’s code of conduct and the global ethics program.

“It’s the Bank’s main legal position, so I see myself retiring here,” said Pederson, who has lived in Roseville with her husband, Greg, of more than 25 years and their three sons. “My next goals as I take on my new role include strategic planning for the Legal Division and improving how the Bank’s lawyers can best contribute to the Fed’s mission.”

How Illinois Wins in the Fight Against Big Tech – Twin Cities