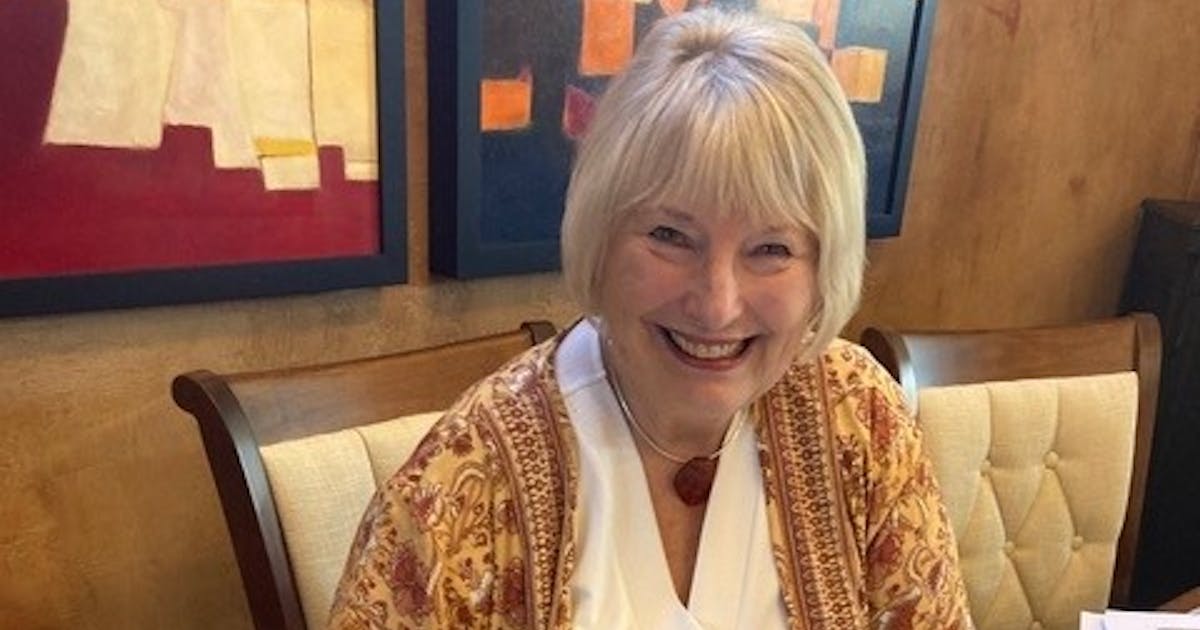 The faded old duvet sat rolled up in a plastic bag for eight years after Pamela Peterman inherited it from her great-aunt Frances. As she unrolled it on her kitchen table in Rosemount on a recent Sunday morning, Peterman pointed out some of the 318 signatures embroidered in the quilt’s blue and white checkered squares.

“It’s a little lumpy and not an example of fine quilt making, but the names on the quilt started to speak to me,” said Peterman, 78, who has spent more than 100 hours in the the rabbit hole of online genealogy research.

She investigated the names sewn into the signature quilt, including her great-aunt Frances Hagander Brazil and Frances’ former roommate Esther Swanson. They were 19, Frances a waitress and Esther a cook, when they lived and worked at the Gardner House Hotel in Hastings.

Then there is the signature of V. Eugene Johnson – a missionary whose family survived a German ship attack in Tanganyika, now the East African nation of Tanzania.

“Look at this one,” Peterman told me, pointing to “Mrs. LW Youngdahl” stitched in blue thread. “It drives me crazy when women use their husband’s name.”

The woman’s full name was Irene Annet Engdahl Youngdahl, a daughter of Swedish immigrants who majored in economics and English at Gustavus Adolphus College in St. Peter’s and graduated in 1919. Four years later, she married Luther Wallace Youngdahl, a fellow Gustie who later became a state Supreme Court justice, federal judge, and 27th governor of Minnesota from 1947 to 1951.

Peterman’s detective answered some – but not all – of the questions surrounding the old quilt.

“The common bond was the Lutheran Church of Messiah,” Peterman said, recalling his family’s Swedish immigrant church in south Minneapolis that opened in 1917 and was razed in 2018. The congregation lives at a nearby community center and at the Minneapolis campus of Minnesota Children’s Hospital. occupies the site where the old altar stood under a splendid stained glass window of Christ with the words “Father, thy will be done”.

Going through a church directory from 1946, Peterman identified many names on the quilt — which she dated to the 1920s based on the birth and death records of the stitched names.

“I would like to know why it was created,” Peterman said. “But my best guess is that it was some sort of fundraiser and maybe people paid a penny to add their name to raise money for the church.”

“It’s not a striking quilt, and it’s pretty faded,” said Carolyn Silflow of Roseville, who has documented hundreds of quilts for the Minnesota Quilt Project – a group that has spent decades researching and photographing quilts. quilts in the state.

“Quilts really tell women’s stories because it was a way for women to express their artistic side, while doing something useful,” said Silflow, a retired biology professor from the Institute. University of Minnesota.

Silflow stopped by Peterman earlier this month to check out the signature quilt. She was more impressed with Peterman’s research than the couture.

“She really impressed me with her relentless dedication to finding this quilt,” Silflow said. “The quilt immediately struck me as meaningful with all these names and the history of a church community.”

Silflow said the iconic quilts “are not super rare, but not something we see every day either.” They often raised money for charity, and signatures are usually the only design element in quilts.

Writing for the Minnesota Quilters newsletter, Silflow described the Peterman quilt in quilter parlance: “Made from Jacks on Six blocks (also known as Double X, Old Maid’s Puzzle, Cat’s Cradle). ” She said it was “machine-stitched and hand-quilted” and that the names “seem to be sewn by the same hand.”

Silflow began documenting Minnesota quilts in the early 1990s. His all-time favorite? A Depression-era “Grandmothers Flower Garden Quilt” by Agnes Kueppers of St. Paul that uses 189 different floral-print fabrics in rings of hexagons. Kueppers, who died aged 94 in 1992, won a blue ribbon in 1942 at the State Fair for that one.

Peterman’s quilt probably won’t end up looking so rarefied. But Silflow will submit information about it to the Quilt Index, a Michigan State University database that includes nearly 6,000 Minnesota quilts at tinyurl.com/MNquilts. You can learn more about the Minnesota Quilt Project at tinyurl.com/MNQuiltProject.

“Looking up the names on my quilt has become an obsession for me,” Peterman said, “maybe because it’s not something I have to do, but rather what I want to do.”

Curt Brown’s Tales of Minnesota History appear every Sunday. Readers can send him ideas and suggestions at [email protected] His latest book looks at Minnesota in 1918, when flu, war, and fires converged: strib.mn/MN1918.