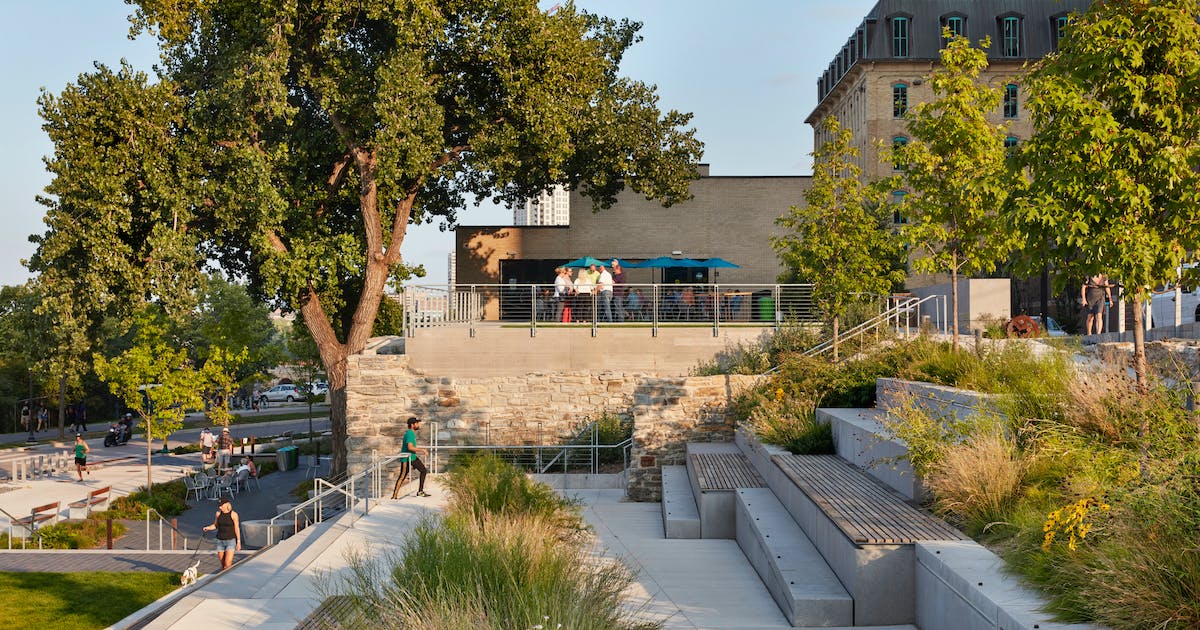 What is the most intriguing new building in the Twin Cities?

Not the Eleven, the gleaming white, predictable and sleek condo building overlooking the Minneapolis Riverfront. Not the glassy Four Seasons that rises on Hennepin Avenue, though it promises to be a vibrant downtown presence. Certainly not one of the many predictably designed mid-rise apartment buildings that are proliferating in downtown and Uptown.

It is Water Works Park and Pavilion in Mill Ruins Park.

Don’t feel bad if you don’t know where Water Works Park is. It is Minneapolis’ newest park space, built on its most historic location.

It literally rises from the ruins of riverside mills that fueled the city’s development in the late 19th and early 20th centuries, where Fuji Ya Restaurant once stood, across from the Stone Bridge. stone arch. The park offers much-needed amenities – places to sit, meet, public restrooms (!) – as well as Minnesota’s first Native American restaurant, Owamni.

The presence of Owamni (Dakota for “place of swirling waters”) is particularly apt. St. Anthony Falls and the surrounding land were sacred to the Dakotas long before white settlers founded a city there.

Connected by the Stone Arch Bridge, opened to foot and bicycle traffic in 1994, the Minneapolis Riverfront attracts 2.6 million visitors annually. It’s a must-see place to get around, but the places to linger were only found on S. 2nd Street, near the Mill City Museum and the Guthrie Theater – and they didn’t offer a waterfront experience. River. The pavilion and the park spaces on either side fill this long-standing need.

The restaurant occupies the second floor of the pavilion and extends onto an outdoor terrace overlooking the falls. The first floor, at the level of the West River Parkway where cyclists, runners and walkers overflow the Stone Arch Bridge, has a public restroom and a large conference room available for reservation. All were built into the stone and brick walls of two historic mills. People can even buy a drink and sit at outdoor tables at the promenade level or around three foyers. And carefully sloping walkways lined with native plants and benches for informal seating bring the people of S. 1st Street comfortably up the 30-foot incline.

It’s like Minneapolis now has a front porch overlooking the Mississippi River.

The design of the park’s space – the south terrace, the city steps to the north – achieves what is so rare these days: simplicity without being simplistic.

Concrete walkways zigzag between lush plantations of native plants – edible, medicinal and spiritual – identified by signs in English and Dakota. The benches – some concrete, some wood – provide flexibility for seating for all and for future scheduled storytelling or music programs (not amplified at the request of nearby neighbors).

Equally revolutionary for the neighborhood, there is a play area for small children – made of natural wood rather than the usual blue, red and yellow plastic.

The pavilion reveals its history in layers. An early design placed the building at the northern end of the site, near the 3rd Avenue Bridge, to avoid building inside the walls of the two old mills in which Fuji-ya was built. But subsequent excavation determined that the walls could be stabilized enough to be built inside – and what a happy discovery it was.

The walls of bricks and thick stones give a mottled and almost mysterious texture to the exterior and interior of the pavilion. A curved, steel-lined staircase transports visitors to the second floor on rich wooden stair treads salvaged from Fuji Ya. Thin yellow bricks (similar to those used on other neighboring buildings like the Crown Roller Mill) fill in the spaces between the salvageable walls.

Damon Farber Landscape Architects led the design team with HGA for the pavilion design, MacDonald and Mack as historical consultants and the 106 Group as archaeologists. The Healing Place Collaborative brought in Dakota artists and language experts to design blankets for the fireplaces and interpret rainwater harvesting and the use of native plants. The selection of artists for a larger work is underway.

HGA has played with the elements of the pavilion, to make it clear that it is a contemporary addition: The central arch is asymmetrical and the glass doors are offset to one side; the brick on the second story makes angles here and there. The movements are subtle enough not to detract from the historic stone walls that give the building its compelling aesthetic.

Inside, the 18-foot-high ceiling, exposed stonework, and remnants of rusted steel create a breathtaking architectural experience.

“We didn’t want to turn it into a museum,” said Tom Evers, who heads the Minneapolis Parks Foundation, which helped fund the project. But it’s hard not to want to know the stories these walls tell.

Up the tactile staircase, the second floor is refreshingly simple and, with just an 8-foot-high ceiling, feels more comfortable. When I stood by one of the restaurant windows, I felt a strong sense of déjà vu: I had eaten exactly here before, in one of Fuji Ya’s tatami alcoves.

That Water Works has developed – and particularly in this way – is a small urban miracle.

In 1987, the Minneapolis Park and Recreation Board acquired the parking lot from Fuji Ya to build the West River Parkway. Revolutionary restaurateur Reiko Weston, a Japanese war bride who brought Japanese cuisine to the Twin Cities, discovered that her restaurant couldn’t survive without the parking lot. In 1990, the park council eventually took over the entire property, which stretched north to the 3rd Avenue Bridge.

But, tragically, the park council had no intention of using the property and no money to preserve or develop it. The unique building, which gave so many their first experience of the Minneapolis Riverfront, has collapsed.

Twenty years later, developers observed the booming riverside property and came up with low-rise luxury townhouses, then an 11-story luxury condo tower. After years of feuds and a lawsuit, the park council halted development of the condominium. But the property was derelict, a dilapidated barrier between the city center and the riverside.

In 2011, the newly revitalized Minneapolis Parks Foundation and the Park Board’s central master planning Riverfront planning process reassessed the area. The eye-opener: this incredible site should be a park, not “excess land” to get rid of. a much sought-after river view at 26e N. Avenue to help connect the north side of town to Mississippi.

It took a few design detours and major excavations to reveal the existing mills, determine the right location for the building, and imagine such a welcoming park space. After 30 years of urban blunders, Water Works is a triumph.