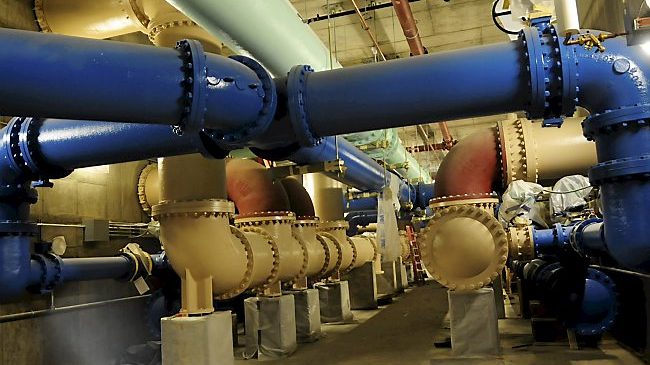 Minnesota cities and local water utilities will accelerate the removal of underground lead water pipes this year with a tranche of $15 billion in funding over the next five years provided by a bipartisan infrastructure bill that Congress and President Joe Biden signed into law in November.

Lead utility lines deliver water to up to 10 million U.S. homes — about 7% of all residences served by community water services — putting the health of residents who consume it at risk.

Support for removing lead from drinking water has grown since 2014, when improperly treated water damaged city pipes and released lead into the Flint, Michigan water system.

Under the new federal program, Minnesota is set to receive $43 million a year for the next five years, Jeff Freeman, executive director of the state’s Public Facilities Authority, said last week. The authority administers grants and loans for Minnesota water projects.

The Minnesota Department of Health estimated in 2019 that there were 100,000 lead utility lines left in the state, carrying drinking water to Minnesotans who may not suspect their water might be contaminated with lead. . But the Natural Resources Defense Council said in July the health department’s estimate covered only part of the state, and the council’s 2021 survey estimated Minnesota had 260,000 lines of service. or more, giving the state the 10th highest number of lead pipes in the nation. .

St. Paul and 13 surrounding suburbs have up to 26,600 lead service lines on private properties and an additional 9,000 lines on public rights-of-way, the St. Paul Regional Water Department reported last week. It would cost about $223 million to replace all of these lines, plus an additional $15 million for street improvements.

The St. Paul Regional Board of Water Commissioners voted Tuesday to develop a plan to replace all lead water pipes within 10 years. These pipes would be replaced by copper or polyethylene pipes.

“This is a once-in-a-lifetime opportunity” to eliminate a serious health hazard, Commissioner Chris Tolbert said ahead of the vote.

Federal grants administered by state agencies could cover 10% of the area’s pipe replacement costs, said Dave Wagner, director of the water utility’s engineering division. He estimated the service would receive about $5 million a year in grants and $5 million a year in state-administered loans over the next five years for the project. Water tariffs would probably have to be increased to cover some of the costs.

Replacing private lead water lines would cost the average homeowner in the St. Paul area about $6,000, said water utility general manager Pat Shea. Those homeowners will likely need to replace lead water pipes and fixtures, but Water Services Board members said they plan to use federal funds to help homeowners cope. at these costs.

The City of St. Paul already allows water customers to pay for lead pipe replacement costs through property taxes over 20 years, but only 5-10% of homeowners exercise this option.

State agencies will allow cities to decide how to spend federal funds on private grants, said Chad Kolstad, manager of the Department of Health’s clean water fund. But laws may need to be changed to allow subsidies.

However, removing lead pipes would increase home values, the health ministry reported. He cited a 2017 study that showed that money invested in lead risk reduction results in a return of $2.60 for every dollar spent.

The cost of replacing all lead service lines across the country could range from $28 billion to $47 billion, which puts the $15 billion approved so far well below that figure. But the infrastructure bill “provides unprecedented support for states … to get the process started,” the Brookings Institution reported.

THE THREAT, THE ADVANTAGE

According to the federal Centers for Disease Control and Prevention, lead can leach into water from pipes and there is no safe lead exposure level.

The state health department said children are most vulnerable to the health effects of lead exposure due to their brain development and behaviors. “For infants and children, exposure to lead can cause significant damage to the brain, nervous system, red blood cells and kidneys,” the department said.

Municipal water lines contribute significantly to lead in drinking water, but an even bigger factor is lead leaching from plumbing fixtures, which are generally controlled by homeowners.

The Department of Health estimated the cost of removing all lead plumbing pipes and fixtures in Minnesota would be $1.5 billion to $4.12 billion over 20 years. But he said the benefits of removing lead from water include “improved mental acuity and IQ of the population (resulting in increased productivity, income and taxes paid over the course of the life).” He projected the benefits range between $4.24 billion and $8.47 billion over 20 years. Thus, the money spent to reduce lead in drinking water should return at least twice the amount of the investment.

St. Paul’s water utility has been replacing lead pipes for over 25 years, but only about 400 pipes a year, and all of them in rights-of-way.

Most lead service lines in St. Paul were installed in homes built before 1927 and a small percentage of homes built between 1942 and 1947.

The Department of Health said most of Minnesota’s major service lines are located in the Twin Cities and Duluth. He cited reports estimating 49,000 such lines in Minneapolis and 5,000 in Duluth.

But Kolstad said several other towns in Minnesota have more than 1,000 lead service lines.

He said low-income and minority communities would be prioritized for funding because their residents are more likely to be exposed to lead sources.