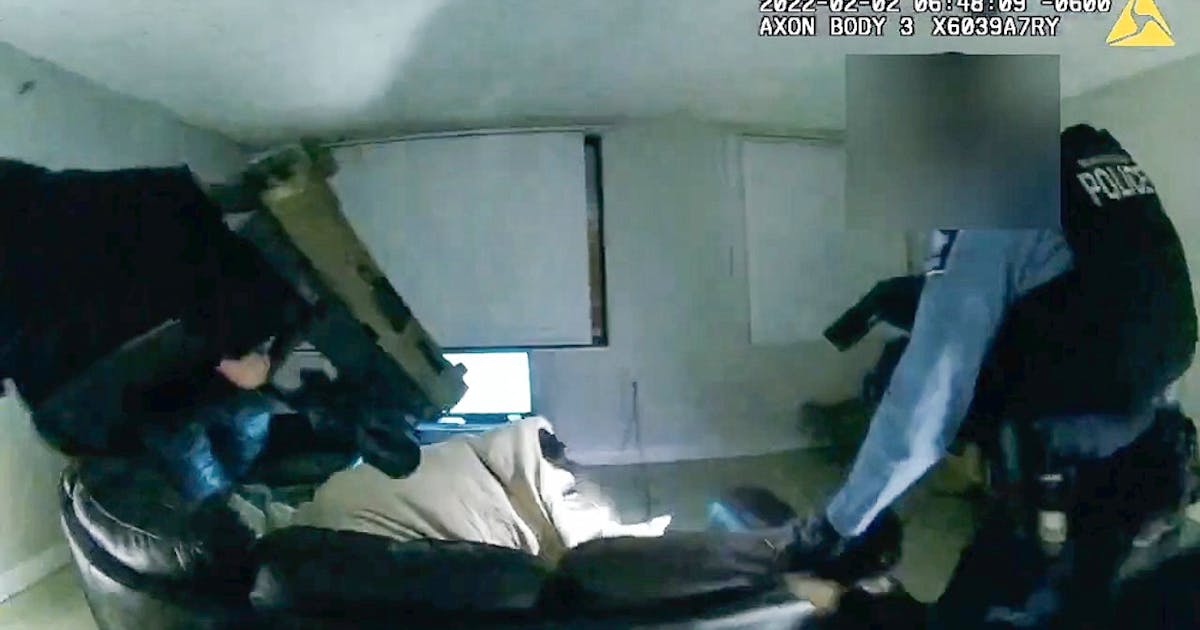 The world has lost its mind.

Police should know by now that making a no-knock entry (“Video Shows Fatal Police Raid”, front page, February 4) before 7 a.m., with glaring lights and shouted profanity and orders, can trigger a defensive response from almost anyone. They certainly shouldn’t expect immediate compliance from someone who was apparently asleep when they entered. The element of surprise can promote the safety of officers, but it inevitably endangers the occupants.

The police also need to understand that there is a good chance that someone other than the target is in the house, as was the case here.

Yet they went charging here and shot a man in legal possession of a weapon, a man who was not their target or a suspect in the investigation. Obviously, the man had to have a weapon handy for his own protection, as he was entitled to. Why he may have slept with a gun is irrelevant at this time. His death was a direct result of choices made and actions taken by the Minneapolis Police Department.

There is a good chance that the officers involved will not be charged in these circumstances or sanctioned in any way, even if they circumvented the minimum requirements for smooth entry by announcing their presence only after putting the feet in the apartment.

Although I cannot feel the depth of anger and fear this can generate in my son and other people of color, I can and do feel fear every day for his safety in a world where the innocence and the protection of the innocent are not even a consideration in police actions.

The Star Tribune article “Video shows deadly police raid” on the murder of Amir Locke claims that “Minneapolis has restricted the practice” of no-knock warrants, “but [it] is still sometimes used in some cases. “This is misleading. Prior to 2020, the city executed an average of 139 such warrants per year. But according to a September MinnPost item, between November 2020 and August 2021, the city obtained 90 no-knock warrants. It’s barely a discount. Asked about the discrepancy between the apparent policies restricting their use, Mayor Jacob Frey said: “What this policy did was to produce a very objective and clear line, which says: The announcement must be made before the violation of the threshold. It is the currency.”

Minneapolis has not reduced the use of no-knock warrants. At best, it took a small step towards clarifying the rules, but made no real improvement. [Opinion editor’s note: City leaders on Friday announced a moratorium on all no-knock warrants pending a review of the MPD’s policy.]

After seeing the video of MPD officers entering an apartment and killing Amir Locke, and reading about it on the Star Tribune website, I had many questions. The setting was described as occurring Wednesday morning, before 7 a.m., in a dark apartment (other than police lights), with Locke under a blanket. What I hear in the body camera video is a lot of police officers yelling – yelling at each other very quickly. The officers’ words seem garbled. Was Locke fast asleep when the officers entered? What does Locke hear? What is Locke thinking if he just woke up? Does he know it’s police in the apartment? How can officers expect a person to understand their orders if the person is sound asleep? How long does it take for the person to understand what is happening? The person’s first instinct is that there is a threat against them.

This is not the first time I have listened to audio from police body camera videos and heard commands so loud, fast, garbled and incomprehensible.

Decades ago, I was fast asleep on a train through East Germany when an East German guard entered my sleeping car at night and woke me up (demanding a passport). It took a while (half a minute to a minute) to figure out who that person in my sleeping car was and what was going on. My first instinct was that there was a serious threat. It was scary.

In Wednesday’s paper, there was an Associated Press article titled “Tesla Recalled Due to Software Issue” with a caption that read “…feature will bring back 54,000 vehicles.” In fact, reading the article made me realize that there is no software “problem”, but instead the title refers to an optional software feature intentionally built into automobiles. Also, not a single vehicle will be brought back anywhere, but instead the functionality will be removed using an over-the-air vehicle software update (this was incorrectly called in the article on the Internet). The article also referenced an electrical and computer engineering professor regarding the purpose of four-way stop signs. Why not talk to…maybe…a traffic engineer for that expertise?

This type of article seems to continue a trend of looking for bad things to say about Tesla vehicles. No other manufacturer can update the software running the vehicle over-the-air or without returning to the dealership. Instead of calling it a “problem,” why not point out how Tesla is able to update over 50,000 vehicles to remove a feature it discussed with the National Highway Traffic Safety Administration and determined to wasn’t sure – so the company deletes it? Owners of these vehicles are not inconvenienced and, in fact, will have a “safer” vehicle in a few weeks. That’s an understatement because Tesla vehicles are already among the safest on the road! (The NHTSA website shows that all four current Tesla models have five-star safety ratings.)

Wow, good for Steven Dornfeld if he really doesn’t need a tax cut (“Retirees like me don’t need or deserve a tax cut”, Opinion Exchange, February 4). I’m also a retired baby boomer, and I could most definitely benefit from the elimination of all Social Security taxes. There’s a reason 38 other states don’t tax it. As for worrying about our kids in their thirties, ours are better off at their age than we were back then, even with their student loans to pay. How many retirees leave Minnesota just so they don’t have to pay Social Security taxes, which takes even more than those taxes away from the state? My wife and I may follow them soon.

Are you kidding, Steven Dornfeld? There are retirees who have to make the most basic choices on a daily basis: rent, food or medicine. These people worked and lived responsible lives, but the government cut little or no tax breaks for them. The recent increase in Social Security is laughable. Let’s see, what can I spend my newly acquired wealth on?

Maybe I’ll splurge on a hardcover book rather than a paperback.

We want to hear from you. Send us your thoughts here.