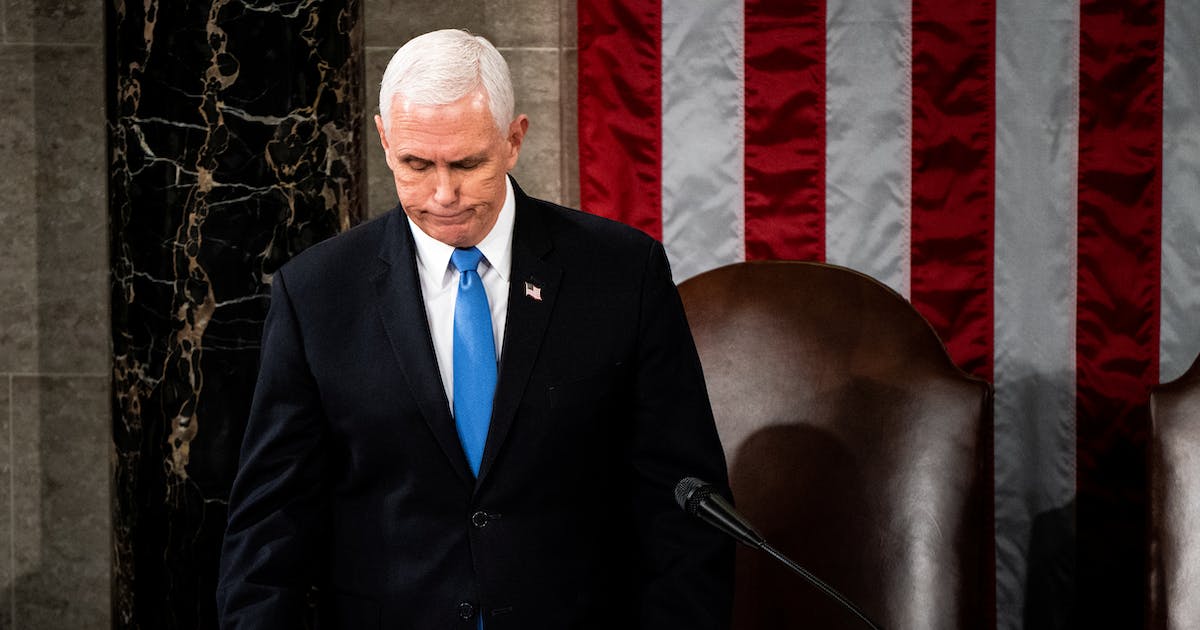 Although I’m not a fan of his politics, former Vice President Mike Pence should be recognized as a great American hero (“Trump, Eastman knew the election ploy was wrong,” front page, June 17). I can’t imagine the courage it took for him to resist the pressure put on him.

According to Wikipedia, “The Presidential Medal of Freedom is an award given by the President of the United States to recognize individuals who have made “an especially meritorious contribution to the security or national interests of the United States, to peace in the world, culture or other significant aspects. public or private enterprises.'”

After the committee hearing on Thursday, Jan. 6, President Joe Biden is expected to award Pence the Presidential Medal of Freedom. His rejection of former President Donald Trump’s efforts to stage his illegal coup plan clearly demonstrated his courage and loyalty to the Constitution.

Thanks to the Star Tribune for the article about racial covenants in Ramsey County (“Racial covenants span St. Paul”, January 16). The article, however, omitted key information. The reason most Ramsey County deeds containing race pacts “appear to have been recorded in the 1920s and 1940s” is that racial segregation became official federal government policy during that time. As part of the New Deal, the Federal Housing Administration refused to insure any mortgages in or near racially integrated neighborhoods and required there to be a racial pact in order to qualify for federal coverage. Thus, real estate developers would have found it difficult, if not impossible, in the midst of the Great Depression to build homes without a racial pact or for individuals to obtain a loan without a racial pact. In 1944, after World War II, the Veterans Administration adopted these same racist policies in the administration of its home loan program for returning veterans.

It is important to recognize that the racial pacts described in the article were not simply the decision of ordinary citizens. These racial pacts and the segregation of American cities were the direct result of government policy. These policies have also denied people of color access to credit and other wealth-building tools, including thousands of veterans who fought for this country overseas and were denied the benefits granted to white veterans. For more information, read “The Color of Law: A Forgotten History of How Our Government Segregated America” by Richard Rothstein and “Family Properties: Race, Real Estate, and the Exploitation of Black Urban America” by Beryl Satter.

The author is a district court judge.

For example, the Mapping Prejudice Project uncovered racial covenants in old real estate documents — which have been legally unenforceable in Minnesota for nearly 70 years. A question for the “6,000 volunteers scouring the deeds” for progressive homeowners to proudly declare their distaste for the dusty papers in their home’s title history: Couldn’t their volunteer time be better spent solving of the current appalling racial inequalities in Minneapolis and St. Paul? , rather than chasing away the ghosts of our distant past? Perhaps tutoring children from underprivileged backgrounds or supporting fundraising efforts for businesses owned by black entrepreneurs, for example.

It has been reported (“Schools Consider Native Ritual”, June 15) that St. Paul Public Schools is considering a new policy allowing and encouraging the Native American practice of smudging – the burning of sage or other sacred herbs. for healing – at schools and events in the state’s second-largest district. Reports indicate that the purification is cultural and not religious in nature. This is belied by the claim that it is sacred herbs that are burned. This indicates a religious nature.

It is admirable that people learn about indigenous culture and beliefs, and Native American children need to feel like they belong, but I believe that allowing, even encouraging, the practice of smudging, an indigenous religious practice, opens up the door to allowing all religious practices in public schools – a bad idea and unconstitutional under the US Constitution.

So good that St. Paul Public Schools is considering allowing Native American smudging rituals, burning sage and other sacred herbs to heal positive energy replacing negative thoughts. There may be some resistance to this from advocates of separation of church and state, but why not extend this to all religious belief systems? Christians could have daily communion prayer services, Muslims their daily prayer times, Jewish worship, Bible studies, intellectual studies, etc. … something to suit everyone’s needs.

Thirty minutes of free time could be added to each school day providing something for everyone, including study or group discussion time for non-attendees. Special holy days could be recognized for all denominations. Students could be invited to participate in each ritual as a unique opportunity to learn all religious practices, and our understanding of community diversity would be all the better for this privilege.

In considering allowing the Indigenous practice of smudging, I caution school districts to consider some possible ramifications. Although I have no objection to the practice or transmission of cultural rituals, it could be interpreted by some as a religious practice. This opens the door to other groups seeking to accept their rituals. Personally, I have no problem with students expressing their beliefs or opinions, which is a constitutional right, but the consideration in this case is, what practices and activities will the school district decide to be allowed or not? What would schools decide if a Wiccan practice was promoted as a cultural practice as opposed to a religious practice? How does the practice of students holding prayer meetings on campus fit into this discussion? Disclaimer: I was part of a group that held Bible studies on campus, during lunch breaks, or before school as a high school student in the 1970s.

Again, I’m just advising school districts to be careful when determining what is a cultural practice versus a religious practice – and what is cultural that some might interpret as religious.

How about: What is the UN?

A metaphor might help. It would be an image we can view outside of the uniquely shaped UN building with flags outside and a large council chamber inside.

The metaphor can be a campfire. Around this campfire, people around the world are having conversations about “finding ways to strengthen all citizens’ desire for peace and justice”, in the words of Stu Ackman of the United Nations Association of Minnesota (our local UN campfire).

Thousands of years ago, around campfires, we learned from each other’s daily discoveries to search for what was out there, what was safe, what was not, which way led to a future, which did not.

Gazing into the glow of prehistoric embers, we discovered our most important tool: conversation. We’ve learned that if we beat around the bush, what’s in the bush will probably eat us up.

Today, we still fall prey to what exists, but much less than if we didn’t have campfire-type places of conversation. We instinctively know that a campfire is a great place to have a conversation. We tend to listen to each other around a campfire, even more so, perhaps, in the dark.

In the light of the United Nations campfire, we can keep alive the hope that we find ways to strengthen the desire for peace and justice of all citizens.