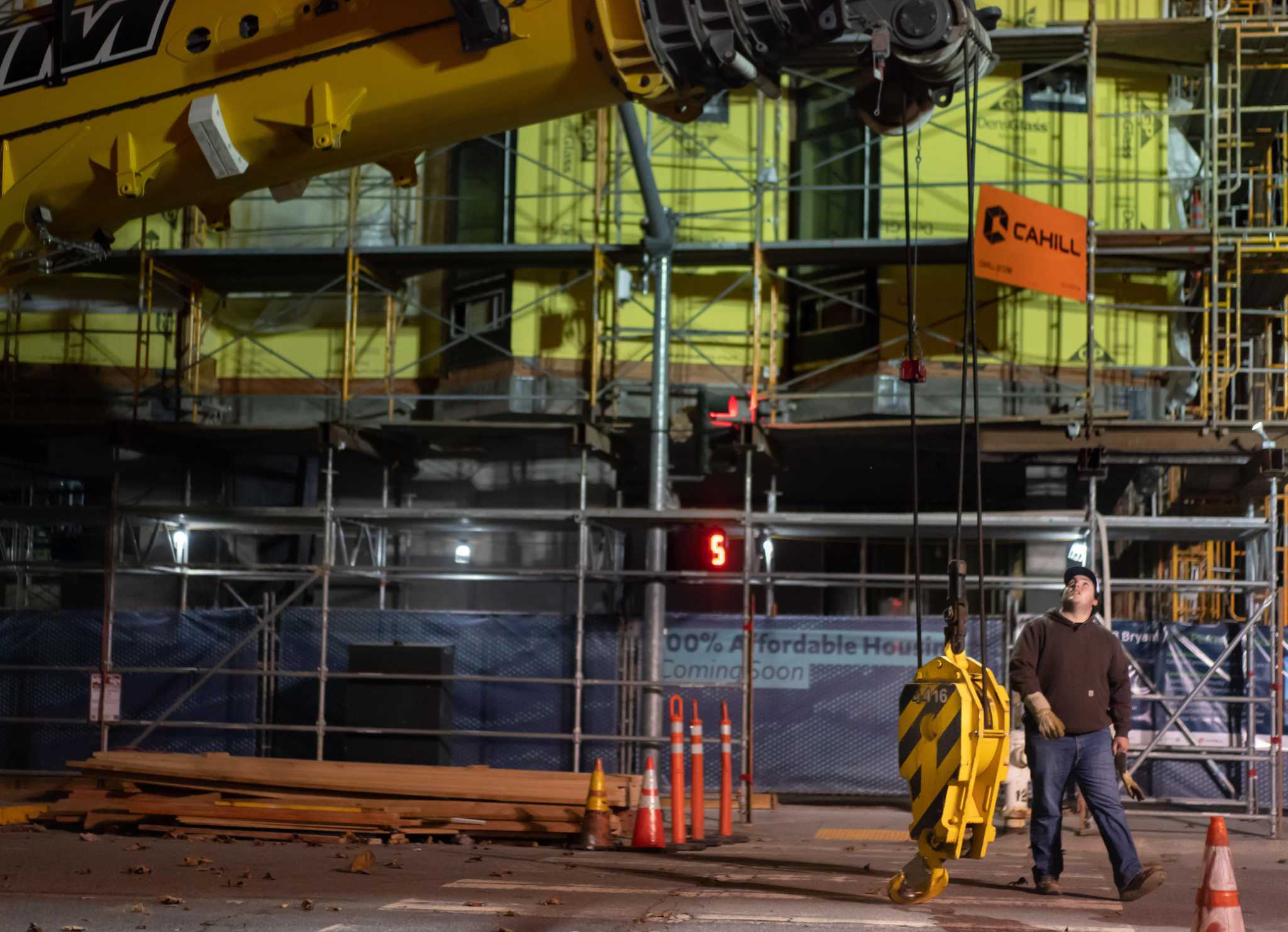 San Francisco is at the heart of California’s housing dysfunction. Here’s what the locals are saying

Responding to Chronicle’s Readers’ Survey on Housing: What I hear from many of my neighbors when it comes to adding â€œaffordableâ€ housing to our Portola neighborhood is fearâ€¦ fear the other. The â€œotherâ€ being a recently homeless family or a family of color.

I am in favor of building more housing in San Francisco. And especially housing that the service people who work here can afford.

How can we do that? Now is the time to answer this question. I hope to see new apartment buildings in the Portola before the end of the decade.

I consider myself strongly pro-housing. I don’t see a way to increase the affordability of housing in the Bay Area without increasing the supply (in San Francisco and surrounding communities). This can include both luxury accommodation and below market accommodation; I don’t think we’re going to build enough just relying on city / state.

When it comes to the character of the neighborhood, the most important thing for me is the ability to walk and the general bustle of the streets. I don’t consider the architecture of the building to be that important – a neighborhood, it’s its people, and that should include diversity of income, race, family structure, etc.

I would rather live next to an ugly new building that families can afford than all the expensive Victorians that only house the wealthy or retired people who bought their places 40 years ago.

We need a healthy mix

I am a 21 year old resident of San Francisco, having migrated here from the east coast. My husband and I own an apartment in a two-unit condominium in the Inner Richmond neighborhood, in a building that includes single-family, two-unit and multi-unit buildings. Our block is a great example of how housing of all types can work well together to form a vibrant and cohesive neighborhood.

Without more luxury housing, people in the high-end housing market will simply buy more lower-end housing – displacing people who otherwise could afford it – and spend hundreds of thousands of dollars to fix it. We see it every day in our neighborhood. And the people who sell their property take the huge profits and leave San Francisco for good. It is sad and unhappy.

The â€œcharacter of the neighborhoodâ€ is the people. I believe we are at our best in neighborhoods where people from different backgrounds – financial, ethnic, cultural, racial – can live and learn from each other.

I consider myself a “progressive” on housing. The most important housing issue for me is the additional housing of all types, from luxury to lower market. But San Francisco also needs to build much better public transportation, especially on the west side, to accommodate additional people and reduce car traffic.

Can San Francisco remain the beloved city if it changes its cityscape to make room for newcomers? Sure. Cities must always evolve or they die. San Francisco has plenty of room for higher density everywhere. But in what other city can just about everyone find a beautiful park within a 10 minute walk? Or world-class sporting events, museums, restaurants, farmers’ markets, performing arts and outdoor spaces?

I wouldn’t want to live anywhere else in the world.

I have worked in real estate development in San Francisco and the rest of the Bay Area counties for over 20 years. And I am progressive on the need to build more housing.

The most important need is affordable housing. â€œAffordabilityâ€ and market-priced housing don’t go together in San Francisco, because construction costs are so high that a market-rate developer can only develop for the highest market rents or selling prices. . For example, in San Francisco, it will only be possible to offer affordable housing built by genuine affordable real estate developers who have access to sources of equity capital for these types of buildings.

How can a city love itself if only people who earn $ 200,000 or more can live here? The city does not belong only to the rich.

The city can be even better

Neighborhood character is a more politically acceptable way of saying that it stays as it is, and keeps those “others” out, maintaining a lack of diversity.

There is a great need for housing at all income levels. New housing at market price, with all the requests for approval, is inevitably expensive. More new homes under construction will dampen the demand for existing units converted to luxury homes. San Francisco today (or at least in 2019 before the pandemic) is the best it has ever been. And I expect him to get even better.

As I get older over the next 20 years, I expect living in a three story house to become more difficult. When I reach this point, I hope to move to a building with an elevator located in or near my neighborhood.

One final thought: I live in zip code 94114, recently reported as one of the richest in the country. I would like to see more diversity.

As the former executive director of the San Francisco Housing Action Coalition, I would like to put my two cents in there. I object to the use of the term â€œluxury housingâ€ as a catch-all to describe the production of new housing. It’s inflammatory and does little to inform the debate around our housing affordability crisis.

I suspect that little of San Francisco’s current paltry output is actually luxury accommodation, which typically includes amenities like scenic views, concierges, fancy gyms, and more. It is also limited to certain neighborhoods. There are no luxury homes under construction in the Tenderloin, Sunset, Western Addition, Bayview and many other areas of the city.

Unfortunately, for a variety of complex reasons, ALL new multi-family homes in San Francisco are really expensive to build. The culprits are the stratospheric costs of scarcity of skilled labor and construction materials, high land costs, costly and time-consuming process and permit costs, and the very high taxes and fees that we impose on new housing at market rates to subsidize â€œaffordable housingâ€. A modest 30-unit apartment building in the Richmond District with small units, no views or amenities, and limited parking usually faces the same obstacles as a 30-story glass and steel tower on the waterfront. water.


The problem with labeling all new housing as â€œluxuryâ€ is that most simply aren’t. In public debates, what we call things matters. Regardless of how it is approached, solving our housing crisis requires that we dramatically increase the production of housing in all of our neighborhoods. The use of false arguments to oppose it should not be accepted. Also, it is perverse that people who live in neighborhoods where homes cost $ 1.5 million (San Francisco median selling price) or more are taken seriously when they oppose new housing in the city. reason that they are too expensive.

San Francisco is a large international city. However, many locals still want it to be the hip little town of the 1950s. To solve the housing problem, people here must first accept that change is inevitable.

There is a lot of land available to build. Affordable housing, housing for the middle class and, yes, housing for the rich. There is nothing wrong with building high end condos for wealthy billionaires around the world who would love to live in San Francisco. Their condos pay property taxes and are only occupied a fraction of the time.

San Francisco needs to understand that it is a vibrant, diverse and exciting international city.

A collection of ideas

When we talk about urban design in the profession, and as students, there are a lot of movements. From prefabrication to collective housing, through the manufacture of the village and the assembly line, urban renewal / cleaning of slums, the creation of places, urban transport, visual aesthetics of young and old, parks and streets, neighborhoods, living communities, market spaces and squares.

Itâ€™s historic. Yet it evolves with history, culture and community.

We must constantly ask these questions of our community. What could we be? Where do we want to be?

We have the creativity and the knowledge here in San Francisco. Let’s do something right and organize a charette in front of the town hall to do some serious planning ideas and invite the community!