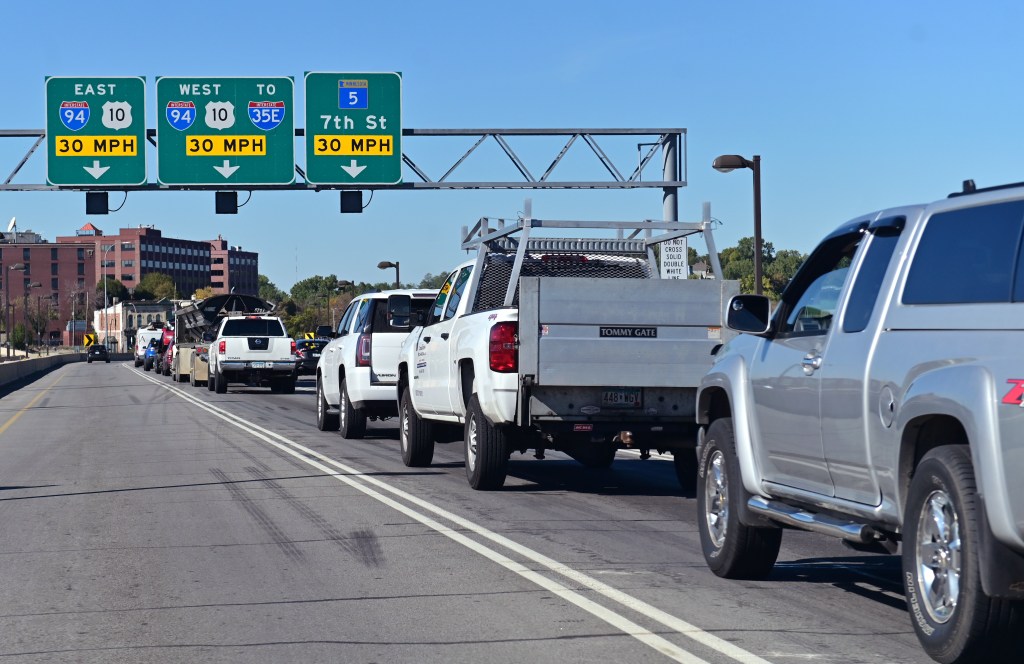 Signage will not solve the Lafayette Bridge problem – Twin Cities

I read with interest the article on the Lafayette Bridge problems in the Pioneer Press on September 26th. As a Minnesota-based truck driver, driving nationally as well as on Minnesota roads for 44 years, I’d like to share a few observations.

Signage will not change human nature, never has, and never will, for some drivers. Speeding on a stopped traffic lane and last-minute cuts will continue.

The traffic safeguard issue must be resolved on I-94 westbound. Having 52 North and I-94 West trying to go north on 35E creates the choke point and saves traffic on 52N and I-94W.

Why not add a lane to the I-94W traffic exit ramp for smooth access to I-35E N?

And yes, I know real estate is limited and some federal standards may require an exemption, but isn’t traffic flow and accident reduction the goal?

I use the Highway 52 Lafayette bridge daily, and have done so before, during and after its welcome reconstruction.

I’m not sure the new signage will help resolve the current issues.

It seemed to me immediately after repair that … oops! â€¦ Some planners neglected to factor in the amount of traffic heading west and north (I-94W in Minneapolis, or I-35N), now funneled into the single center lane.

The room (right lane) is usually open, until the drivers of the saved center lane get frustrated and rush in and out of it (dangerous). The same, I guess, happens from the left (east) lane.

I see drivers who clearly understand the signs, have patiently adapted to the new driving modes, but still sometimes lose patience with the new delays.

I would go for newer tracks, no more panels.

It’s fall and the media remind students that sport is the most popular activity in high school.

The media coverage of high school sports compared to any other activity is ridiculously lopsided. Even average football teams get more coverage than Theater, Group, Debate, DECA, and Academic Olympics combined. For example, the Minnesota High School Mathematics League State Tournament hosts some of the state’s brightest minds, but rarely receives media coverage. How many people even know that Minnesota has an all-state math team that competes in national competitions? The three co-captains are all National Merit Scholar semi-finalists with perfect ACT scores who volunteer their time to help younger students excel in math. Guess what they’re missing is hockey hair.

We know that participating in sports increases grades, overall school attendance, and team building skills, but so do the group, robotics, drama, academic Olympics and more. the DECA.

Unfortunately, it is not just the media that is conveying this message to students. Governor Walz once named the Minnesota Olympic gymnast, and his Twitter posts are full of congratulations for the athletes, but he ignored the Minnesota students who won the national speeches and debates, a gold medalist member of the US Physics Team, and the winners of the US Science Bowl. I have found no recognition from him for our state’s National Merit Fellows since he took office.

Could this explain why our country ranks 31st in the world for math literacy and 8th for reading? Children are systematically shown that sport is valued over academics.

U of M research: vaccine offers better protections for those who have already had COVID