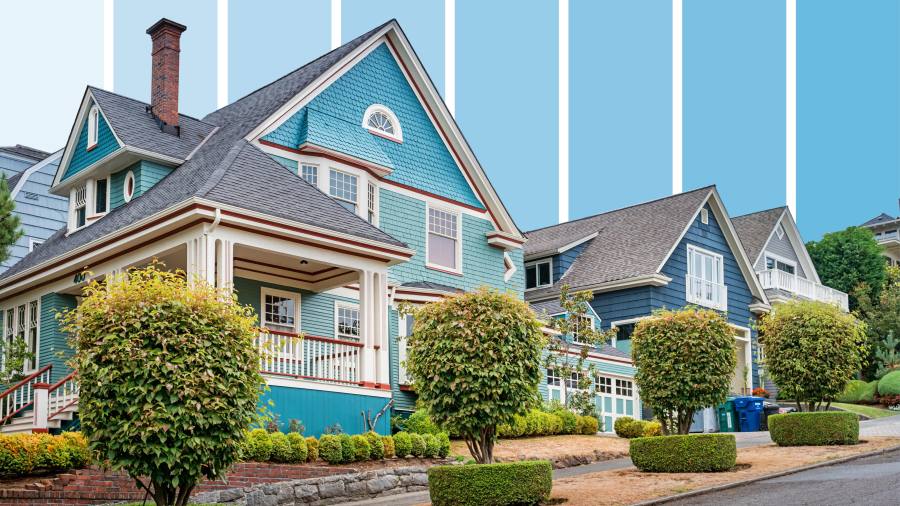 The great cold of the American real estate market

Home prices in U.S. cities, particularly in the West, are falling as rising mortgage rates have reduced the number of home buyers.

In April, annual price growth in the United States peaked at 21%, according to real estate firm Zillow’s home value index. Last month, that figure had fallen to 14%. Prices in the U.S. residential real estate market are resetting, says Zillow senior economist Jeff Tucker, “but it’s too early to tell how big the price reset will be.”

In July, the S&P Case-Shiller index, which measures home prices in 20 US cities, posted its first monthly decline in a decade, down 0.44%. In August, the median U.S. home price was $356,054 according to Zillow, about $1,500 lower than its all-time high in June.

“The fact that prices are falling rather than rising is a watershed moment,” Tucker says. “We really haven’t seen anything like this since 2010 or 2011. [ . . . ] This summer marked the end of that long bull run for home value appreciation in the United States.

Mortgage guarantor Freddie Mac reported that as of October 6, the average 30-year fixed-rate mortgage had fallen to 6.66% from 6.70% the previous week. But a year earlier, the rate was 2.99%. Mortgage rates have risen rapidly this year as the Federal Reserve ended its mortgage-backed securities purchase program and also raised interest rates to counter inflation.

The Mortgage Bankers Association reported on Oct. 5 that mortgage applications were down more than 14% from the previous week. Existing home sales in August were down 19% year-over-year, according to the National Association of Realtors.

” How are you. . . to be a tough couple for the industry,” says Austin realtor Andrew Vallejo.

Rising rates are pushing home ownership out of reach for some buyers, slowing demand for homes. Buyers hit an “affordability ceiling” in April and May, Tucker says. The monthly mortgage payment on a typical home with a 20% down payment rose from $1,035 in August 2021 to $1,643 last month, an increase of 59%.

Buyers began to abandon the housing market. At the same time, sellers continued to put their homes up for sale in the spring and summer, encouraged by the record prices commanded in the first two years of the pandemic. Home sales began to slow, and as properties remained on the market longer, inventory – the number of homes available for purchase – began to build.

The longer they sat, the more pressure grew for owners to reduce their list prices. According to the Case-Shiller index, July prices fell the most in San Francisco, at 3.5%; Seattle at 3.1%; and San Diego at 2.5%.

The latest sales data represents offers made months ago, says Taylor Marr, deputy chief economist at estate agents Redfin, and properties that remain unsold do not appear there at all. Eventually, these owners will accept a lower price, further lowering the median selling price in the United States.

The cooling is most acute in the western states, although it is not limited to the region. Sixteen of the 100 U.S. cities where asking prices have fallen the most are located in the west. The greatest impact has been felt in expensive markets such as Seattle, Washington, or San Jose, California, where rising rates add the most to a monthly mortgage payment, or in markets that have the warmest during the pandemic and thus have the furthest to fall – Austin, Texas; Boise, Idaho; and Phoenix, Arizona.

San Jose is one of the fastest cooling markets in the United States, according to data from Zillow. Although the median sale price for homes was $1.4 million, about 25% of listings in August saw a price drop, compared to 12% in August 2021. Meanwhile, homes remained on the market longer: Listings for less than two weeks fell about 5 percent.

Some wealthy buyers employed at tech companies have dropped out of the market this year because the stock market downturn drove down the value of stocks they planned to sell for a down payment, says San Jose realtor Tung Nguyen.

Data from Zillow shows year-over-year price growth in San Jose fell to 2% in August from a high of 26% in February. Prices have fallen as sellers become “more realistic”, says Nguyen. He notes that a condo seller he represented made a deal in March at his asking price of $608,000, but the deal fell apart two months later when the buyer’s stock portfolio dived. The condo fetched $41,000 less when it was sold last month.

Junior Torres, a real estate agent 840 miles north in another tech hub, Seattle, says he, too, has seen business plummet for the same reason. Homes in good condition continue to sell within seven to 10 days, but less attractive listings required “substantial price adjustments”.

“The market is moving, but a correction was needed,” she adds. “It wasn’t a very healthy market, which we had during the pandemic.”

Sellers, who have led the market since the pandemic began in 2020, are waking up to the new reality. Fewer properties receive multiple offers and more sellers reduce their initial listing price. Austin was one of those sellers’ markets. Data from Zillow shows year-over-year growth in Austin home values ​​peaked in January at 47%, before falling to 7% in August.

Austin realtor Katie Dochen recalled the difficulty of persuading a homeowner to reduce the price of a home that has been on the market longer than expected. “For a few months there, pricing a house was like trying to hit a moving target,” she says.

But the downturn has also allowed longtime Austinians Stephen and Ashley Aarons to buy their first homes. With three children and a fourth on the way, they wanted a bigger home, but their efforts to save were thwarted by soaring market prices. Finally, they changed their target neighborhood and closed a five-bedroom house with a pool this month for $1.5 million – below the asking price. “It was a very emotional roller coaster ride,” Ashley says.

Zillow’s housing economist says several acquaintances have eagerly asked if the housing market is “collapsed”, hoping that lower prices might allow them to buy property for the first time.

“The wind has changed,” Tucker said. “Very quickly this weather vane went from being arguably the best-selling market in history . . . to now certainly being more balanced and perhaps, arguably, a buyer’s market in much of the country .

The median stay in an American home is 12 years, Marr says. This means that while investors and buyers may feel a price crisis, most homeowners won’t. Instead, they just won’t sell as much as they could have.

Homeowners “are encouraged to stay put” at this time, he adds. If the real estate market is like a game of musical chairs, “rising interest rates muffle the music, and that makes more people say, ‘I have a good chair. Why would I leave?’ In fact, the August rosters dropped “significantly,” Tucker says. This could mean fewer homes on the market, which would lessen the downward pressure on prices.

This back and forth is the essence of supply and demand and “should help find that new equilibrium price.”

For now, in Sacramento and surrounding counties, there’s less of a price adjustment than an attitude adjustment, says real estate agent Bruce Reddick. Sacramento is one of the fastest-cooling markets in the country, according to data from Redfin, with more than half of sellers cutting their asking price in July, down from about a third in July 2021. So far, Reddick has a more optimistic take, saying it means a home in a less desirable neighborhood could stay on the market for “two weekends instead of one” or that a buyer refuses to give up protection contingencies.

The tilt toward a buyer’s market favored two of his clients. Brent Burky and Christine Burky-Mellon did not participate in the pandemic housing rush, discouraged by the competitive process and rising prices. But worried about rising interest rates and bolstered by family funds, they started looking this summer.

Although they’re excited to soon have a backyard big enough for a garden, they’re cutting spending in anticipation of a higher-than-expected mortgage payment due to interest rates.

Brent says that until the couple adjust to their new monthly outing, “every subscription is under intense scrutiny right now.”