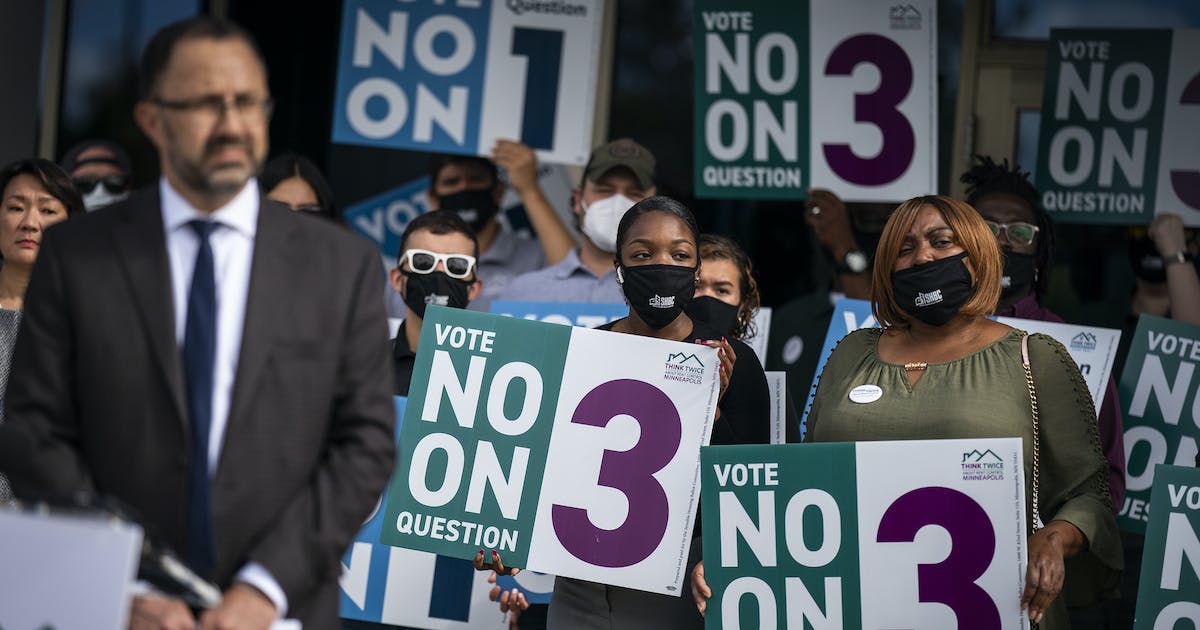 Twin Cities landlords and managers are urging voters in Minneapolis and St. Paul to reject rent-control proposals in this fall’s poll, saying the measures would wipe out an already strained housing market.

While supporters of the separate proposals in the two cities say rent controls would bring stability to low-income tenants – who could see year-over-year rent increases forcing them to find new housing – Opponents argue that housing supply is the biggest barrier to affordability and that rent controls would limit or discourage new construction and investment in existing properties.

“Rent control has been proven in cities around the world to reduce the availability and quality of housing,” Cecil Smith, president of the Minnesota Multi Housing Association (MMHA), said at a press conference Tuesday. . “This has only added to the challenge for low-income residents of these cities to afford a place to call home.”

Representatives from eight housing organizations, including MMHA, gathered outside the North Central States Regional Carpenters Council building in St. Paul to announce the formation of the Sensible Housing Ballot Committee Coalition and urge voters to vote “No” on voting initiatives.

While both cities have rent control initiatives on the ballot, they would do different things if approved. Minneapolis’ proposal would allow city council to pass a rent control policy – details of which have not been established – while St. Paul’s proposal would limit rent increases in the capital to 3% per year.

About 200 municipalities in the United States have some form of rent control. The policy proposed by St. Paul is unique in that it does not provide exemptions for new construction or inflation.

Tram Hoang, campaign manager for Housing Equity Now St. Paul (HENS), who drafted St. Paul’s proposal, said voters would not fall prey to fear from groups that benefited from the low housing stock. and rising prices. The formation of the coalition less than a month before the elections shows that there is momentum for rent control, she said.

“Research shows stabilizing rents is helping stabilize housing for low income renters and renters of color across the country, which is why cities continue to embrace it and why we are certainly not the first. “Hoang said.

Smith cited cities like New York and Mumbai as examples of places where rent control may have worked for the generation that adopted it, but did not benefit future generations who found apartments still occupied at the time. to find a place to live. Hoang countered that long-term occupation – to raise a family, for example – could be seen as a good thing.

Most of New York’s real estate stock is subject to a modernized policy of less stringent rent control than that implemented in the 1970s, said Ed Goetz, director of the University’s Center for Urban and Regional Affairs (CURA). of Minnesota, which published a study on the potential effects of rent controls in Minneapolis earlier this year.

“One of our conclusions is that there is evidence from studies that show that at a certain level there is a decrease in the quality of housing, but above all it is a decrease in aesthetics and in terms of equipment. “said Goetz.

Jeremiah Ellison, a member of the Minneapolis city council, who drafted the Minneapolis proposal with council chairwoman Lisa Bender and council member Cam Gordon, said it was impossible to say for sure how a rent control policy that has not yet been conceived would affect the city. If the ballot measure is passed, the council would develop and adopt a policy using feedback from community members and research such as the CURA report, he said.

St. Paul’s Council member Jane Prince, who spoke at the press conference, said in an interview that she was not against the Minneapolis policy, which she said will allow more great involvement of the community. But St. Paul’s policy as written would be “devastating,” she said.

“We cannot afford to stop new construction,” Prince said. “I have spoken to developers who say this is a very disturbing order.”

Whether or not to adopt a residential rent stabilization order

Authorization of the City Council to promulgate the Rent Control Ordinance

Authorize city council to regulate rents on private residential properties in the city of Minneapolis by ordinance.

Provide that an ordinance regulating the rents of private residential properties could be promulgated in two different and independent ways:

a. The municipal council can issue the ordinance

b. The city council can return the ordinance as a voting matter to be decided by voters for approval in an election. If more than half of the votes cast on the question of the ballot are in favor of its passage, the ordinance would take effect 30 days after the election, or at any time provided for in the ordinance.