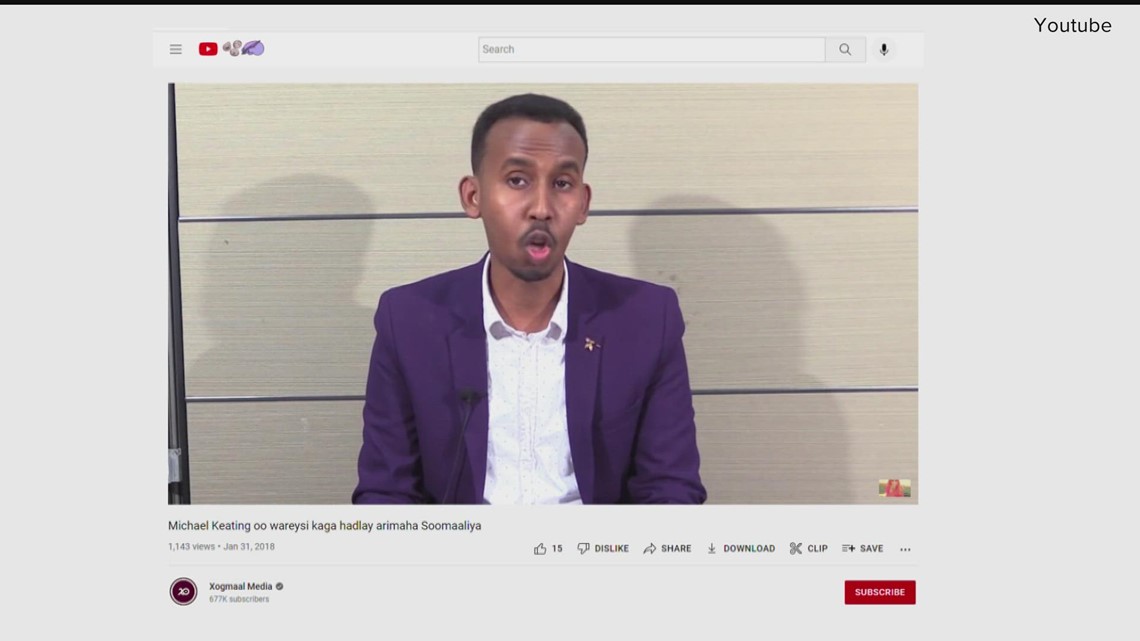 Mohamed Muse Noor aka Deeq Darajo is accused of paying his mortgage, buying cryptocurrency and jewelry with money obtained by defrauding the federal meal program

MINNEAPOLIS — Another suspect in the Feeding our Future meal fraud made his first court appearance Friday afternoon at the Minneapolis Federal Courthouse.

Mohamed Muse Noor was arrested last month at Chicago O’Hare airport before he could board a flight to Turkey.

Noor — also known as Deeq Darajo — is a prominent Somali community journalist in Minnesota and owner of Xogmaal Media Group.

And now he is one of 50 people charged in the biggest pandemic fraud in the United States.

The way his case is presented in court documents makes it among the easiest to track how federal investigators believe the scheme worked.

The documents indicate that Noor registered his media company with the state in November 2020 and the following month would have applied to be a federal child nutrition program meal site under the sponsorship of Feeding our Future.

According to court documents, Feeding our Future executive director Aimee Bock sent an email in February 2021 asking her staff to launch Xogmaal Media as a food site.

The next day, an anonymous Feeding our Future employee emailed Bock, writing, “We’ve taken a lot of organizations that don’t work with children… Xogmaal is a TV show. They don’t have any interest in children. Those are the things we need to clean up.”

Bock reportedly replied “yes, I agree” – but Feeding our Future then wrote checks from the media company for a total of $494,000.

The meal tally submitted by the allegedly media-run ‘after school’ program Xogmaal claimed to feed between a thousand and 1,500 children a day – but investigators write that Noor instead used federal money to pay his mortgage and buy cryptocurrency and jewelry.

Noor is represented by attorney Jason Steck, whose clients include three other defendants in the Feeding our Future case.

Although Steck would not comment on Noor’s case, he answered questions about the federal investigation after Noor’s court hearing. Steck said not all of those charged are guilty.

“As regards at least some of the cases, I will say that the government confused the co-conspirators with the victims. And some of the people working at Feeding our Future weren’t just scamming the government and the Department of Education. They were also ripping off their so-called distributors and sellers below them. And when all the evidence comes to light, it will become very, very clear,” Steck said.

None of the defendants represented by Steck worked for Feeding our Future but are accused of conspiring with the nonprofit.

Watch the latest local news from the Twin Cities in our YouTube Playlist: