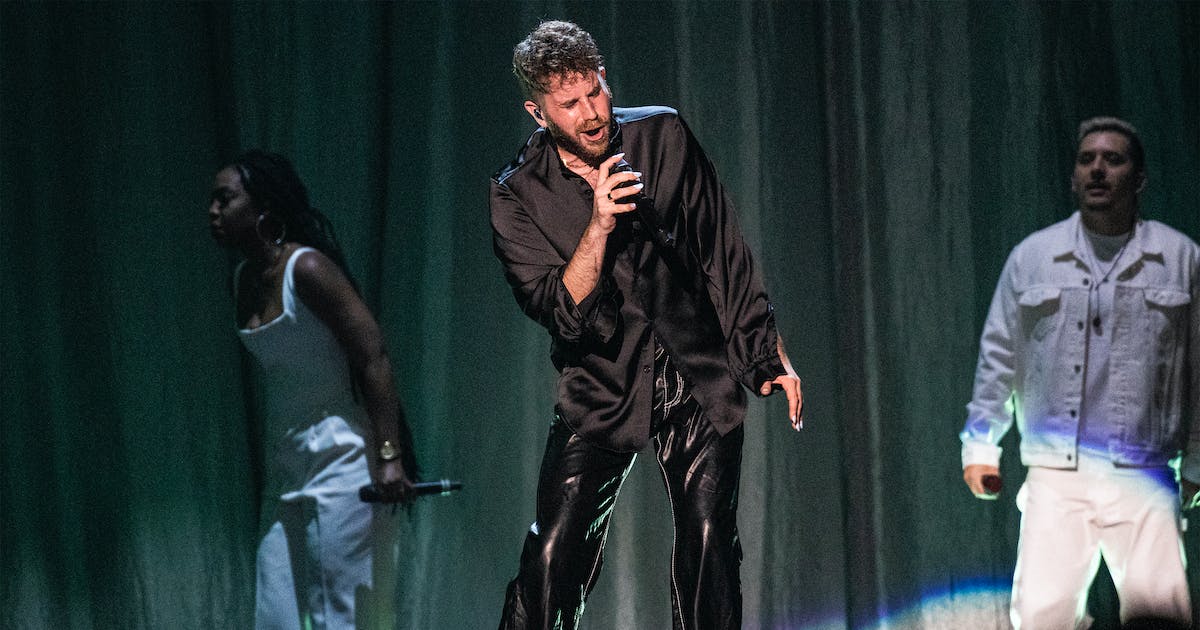 Thursday night was going to be an amazing night and here’s why. Because you were going to make your Minneapolis debut at the Target Center. With Aly and AJ opening, no less.

All you had to do was be yourself. Sing some of your original songs, do some Broadway favorites, and some choice covers. Be true to yourself, be true to your career.

And you were yourself – an unapologetic, in-the-moment performer with easy banter, an exuberant and quirky dancer with no inhibitions, a vulnerable soul unafraid to discuss anxieties and insecurities in conversation and song.

I loved how you rode with the crowd spontaneously singing happy 29e birthday two days early. I appreciated your detailed feedback on your nail polish, although, let’s be honest, no one in the arena could quite see all the shades of the icy blue with chrome and a bit of stone. And your rhinestone-covered water bottle was, as you suggested, musical theater.

Every time you mentioned musical theater the crowd, especially the young women, went crazy. Do we love musical theater in Minneapolis? Of course we do. But we only got to hear one Broadway song from you. And it was on “Waitress”, your girlfriend Sara Bareilles’ show. “She Used to Be Mine” was a splendid showcase for your voice of bravery and a delicious slice of Great White Way drama.

But where were the tunes from the musical that made you famous? I was hoping for “Waving Through a Window” and “You Will Be Found” from “Dear Evan Hansen”. Be yourself, Ben. Isn’t that your mantra?

Let’s talk about covers, shall we? You did Lady Gaga’s “You and I,” which you recorded for the 2021 tribute album “Born This Way Reimagined.” She started her version with a twangy swag and followed it up with bold rock guitars. You’ve gone the more conventional high-pop route, adding crowd-pleasing plays on Thursday, rolling on stage, even singing on your back.

The other cover — Fleetwood Mac’s “Go Your Own Way” with Aly and AJ joining you — was simply casual karaoke. It was a nice change of pace and texture. And your show was well paced, if a bit short at 75 minutes.

But I wanted to hear Brandi Carlile’s “The Joke,” which you did for your Radio City Music Hall special a few years ago. You’re one of the few singers – of any gender – who has the vocal range to pull those stratospheric notes out of this difficult song.

You thought you would be yourself singing songs you wrote. Like almost the tune of “Reverie” from last year, your second pop album. To be honest, the album is overproduced, trying too hard to be trendy synth-pop. Therefore, despite the sincere lyrics and vocals, it didn’t sound as personal as your debut album, “Sing to Me Place.”

However, in concert, the “Reverie” numbers were under-produced, defined by bass and drum beats instead of a heavy wash of electronica. It meant that your voice – that wondrously emotional and lanky instrument – ​​was front and center as it should be.

I particularly enjoyed “I Wanna Love You But I Don’t” with its contrasts of soft and loud, and “Happy To Be Sad” with your heart-pounding falsetto voice.

Of your older tracks, I really liked “Share Your Address”, a clever bop with a beat, and “Rain”, which sounded like Adam Levine from Maroon 5 trying to join Florence + the Machine.

It was encouraging to hear your new “Monsters,” a gripping solo piano piece that’s hard to pull off in an arena, but you cleverly set it up by talking about your younger, still anxious self.

Like the “Reverie” material on Thursday, the entire presentation felt underproduced. A simple scene with no costume changes, no video screens, and no bells and whistles. Neither the performance nor the crowd of perhaps 4,000 people filled the arena.

Minneapolis is not the Big Apple. You might be ready for Madison Square Garden next week, but not for Target Center on a Thursday night.

Think about it, Ben. It could have been an absolutely amazing night in a theater or auditorium. Instead, it was a very good one that will go down in the memory of a few thousand Minnesota musical theater fans.

Thanks for coming to Minneapolis,